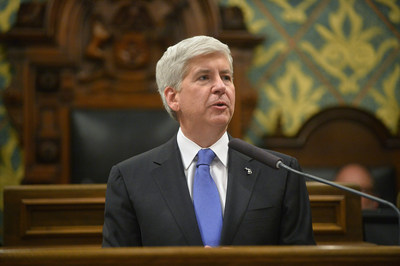 "More than a century ago, Michigan put the world on wheels and we are continuing to lead the world in shaping the future of the auto industry," said Governor Snyder. "As the manufacturing industry converges with the IT sector in the evolution of autonomous vehicles and mobility, we are staying at the forefront. Nowhere else has the manufacturing strength, entrepreneurship growth and automotive R&D leadership that Michigan does.  I look forward to sharing our incredible story at the Washington Auto Show in January."

The governor's remarks are expected to include his vision of the auto industry's future, Michigan's role in automotive mobility, autonomous vehicles and trade as well as other comments. Snyder's remarkably varied background as a venture capitalist, business executive, account and, for the last seven years, governor of ninth largest state in the country, gives him a unique perspective on the auto industry.

"We couldn't be more excited to have Governor Snyder as our kickoff speaker at the Washington Auto Show's Press Day," said Washington Auto Show and Washington Area New Automobile Dealers Association President and CEO John O'Donnell. "The governor's leadership in the areas of technology, autonomous driving and the entire auto industry makes him particularly well qualified to share his views at such a critical time for vehicle development, a time when there is more change than any we have seen since the industry began."

ABOUT THE WASHINGTON AUTO SHOW

The annual Washington Auto Show will take place from January 26 to February 4, 2018. It is one of the five top auto shows in the United States and is the largest indoor consumer event in the District of Columbia. It is preceded by two show-sponsored industry events, Public Policy and Press Days and the MobilityTalks International Conference, with both taking place January 23-25, 2018. During these three days, industry leaders, global public policy makers and members of Congress will discuss proposed and existing rules and laws governing the automotive industry, this year focusing on autonomous vehicles.

The show takes place in the Walter E. Washington Convention Center where more than 35 automakers will display over 650 vehicles.